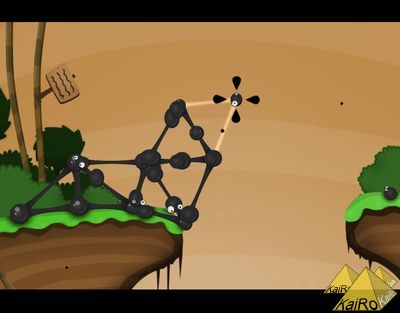 Living On The Edge

As I mentioned, I had planned to switch to KDE 4.2 on my production system as well after it worked pretty well on my laptop. Additionally, most people in our communities probably know about the value of testing development code in production or almost-production environments to find all kinds of bugs and get them reported upstream.
And so, I finally did update my openSUSE Factory system again - it's been a number of weeks since the last update, and that's probably not ideal in the case of such development distributions (but the state I had so long was fairly near to the 11.1 release).

The first problem came up right during the update/install process: package files were pulled out under my feet while I still needed to install them. I guess there is some room for improvement in the otherwise pretty good openSUSE Build Service (OBS) used to provide all those packages. After a restart of the install and another install/update run for more such problems with another OBS repo I've included, I finally had all the new packages on my system. I also had cared to replace the KDE 3 login screen with the KDE 4 one and install all packages I should need with the new desktop after the switch. So far, so good - it was about 4am and I decided to go to bed and continue today.

So, after some hours of sleep, I went up, not forgetting that I still would need to re"compile" the proprietary nVidia driver package (actually, it recompiles the kernel interfaces to load its binary blob with and installs all that). I couldn't help but notice my harddisk churning like mad though and realized an "old friend" from the last such update had come back - the logs were again filled with ATA errors, and writing a few of those every second to the on-disk log really slows down the system a lot. A few kernel reinstalls (trying different versions) and bug comment entries later, I found the only way I could stop this for now is by shutting down the syslog service and not logging any such info on disk for now. At least the engineer owning this bug should have more info now - that's what using development code is all about, right?

So, with the logging off and the video driver installed, I finally logged into KDE 4.2 (or actually, because I'm livin' on the edge, 4.2.60, i.e. KDE "trunk", which is already on the way to 4.3) and started configuring it. I knew most things I needed/wanted from the laptop already, but I mainly ran into two issues: 1) Those nice semi-transparent effects wouldn't work and 2) I wanted different background images for my 8 virtual desktops but could only set one for all.
The first problem was explained in the settings panel with a missing XComposite extension and I could find out that the nVidia driver had set "Composite" "off" in the config file while editing that to "on" just made this work.
The second problem required some more searching, but I could find that the backend work was done as well as an option to turn it on manually - which worked far enough that the background I had set is now on only one virtual desktop, but all others are black and empty (i.e. no background, no icons, just the "plasma" panel) and don't have any context menu or such for configuring them. I guess I need to take some deeper look into manual config.

With that, I'm basically back on a usable system as long as I have syslog turned off and don't need desktop icons. Here's a useful piece of eye-candy I have enabled now: the window list overview I have set as a hot corner action (when moving the mouse out the corner) on the upper left corner works nicely and is quite useful: 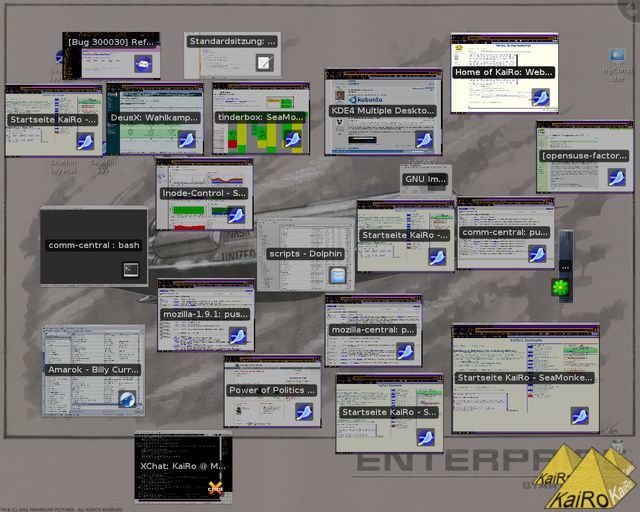 All those images are live views and update with whatever's going on in those windows, clicking on the window in that view goes directly to it in the respective virtual desktop.

GNOME apps like GIMP or XChat, which I use a lot, don't look too well yet, and the latter can't do it's transparent background stuff yet which I like so much, all graphics are slower than before (I already noticed the same with my laptop, so it's similar on nVidia and Intel video drivers, probably something with the XComposite stuff) and there's a few other small things that aren't yet prefect, but it looks like I have a pretty decent way of "Ling On The Edge" here again.

Time to get back to work.

(Tomorrow, at least. Tonight it's time for my favorite bar and some Karaoke.

How to f**k up your system

Disclaimer: Don't ever follow the steps below, or you will learn to avoid it the hard way (like I did this weekend)!

Thankfully this was just my laptop which has no important data (except the small bit of work I did on the train home on Thursday), my father found an app to undelete files on the camera's flash memory card (so my mom's happy to have the photos again), and I brought back the computer to a state where it works OK. Now I'm left with a reason to try out openSUSE 10.3 Alpha/Beta on the laptop (a real upgrade will hopefully overwrite even more damaged files with good copies than I had done before) - and with not having had any of my usual internet access this weekend between helping out friends with a (smaller) fest in town on Friday and Saturday.

It may take me a bit longer than after usual weekends at home to sort out everything that happened in those days - but I'll do it all and nothing important's lost (and yes, I would have backups of all the important data which is on my main desktop computer).