Linuxwochen ("Linux weeks") is a yearly series of Free & Open Source Software events/conferences in Austrian cities, organized by the respective local FLOSS communities but marketed via a common name and website. They commonly take place spread out over several weekends in April and May, with the largest one, Linuxwochen Wien, in Austria's capital of Vienna, on a Thursday through Saturday in early May. In this year's edition, from May 4-6, the Mozilla community was present there once again (like two years ago) with a booth, talks and a workshop. 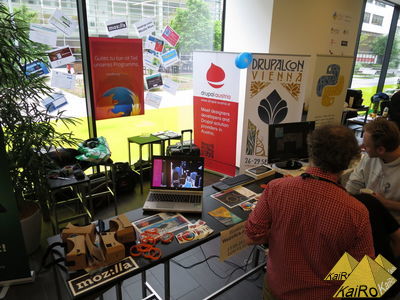 While in 2015, the main topic at the Mozilla booth and workshop was Firefox OS, having a large 4K TV from Panasonic to show off and get people involved, things have changed a lot after sitting out a year (which happened due to me moving to a new condo at that time and as the sole Rep in the area being the one who needs to organize events like this presence).
This year, I was focusing on A-Frame (and therefore WebVR), both with the booth and the workshop. In addition, we could provide a talk by Dragana from Mozilla's network platform team about HTTP/2 and QUIC and I reprised my FOSDEM talk on web logins, this time in German. While the whole conference probably has a few hundred to a thousand visitors (hard to estimate when entrance is free and there are several parallel tracks), I probably got to talk to between several dozen and a hundred people at the booth, my workshop and talk both had 10-15 attendees, and Dragana's talk about 20-30. The conference overall has a bit of a family feel to it, attracting a decent amount of people but it's definitely not really large either. A lot of the attendees are pretty technical and already in the FLOSS scene in one way or another, but as it's happening on a technical college, we also get some of their students who may not be involved with that larger community - and then there are some casual visitors but they're probably rare. 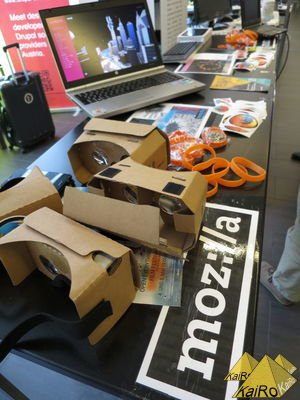 At our booth, next to the takeaway collection of Firefox stickers and tatoos as well as Mozilla wristbands, I put up some printouts of the new logo and related artwork as decoration, and on the glass wall behind the booth, a big poster with a German variant of "doing good is part of our code" and the Firefox log as well as printouts of website screenshots depicting the variety of what's going on at Mozilla nowadays - from mozilla.org, Campus Clubs, Internet Health Report, and changecopyright.org via Rust, Servo, WebAssembly, CSS Grid, and A-Frame to Pocket and Let's Encrypt - of course all with big and visible URLs. On top of that, I had my laptop on the booth, running the Snowglobe example of A-Frame, as well as a few Cardboards and Z3C phones with the Museum example and a 360° image loaded and ready to show. On the laptop, I had the source code of the Hello WebVR on Glitch and a live view of that ready in additional tabs for explanations.

That setup ended up working very well - the always-moving snowglobe and the cardboards proved to be good eye-catchers and starting points for talking to people coming by. I had them look at the museum with the cardboard (nice because it's quite detailed and you can even "walk" around by staring at the yellow dots on the floor that you get on mobile) and told people how that was all running in the browser, and how Mozilla pioneered WebVR, which now is an open standard, and did the A-Frame library, that those demos are written in, and which makes it really easy to write VR scenes yourself, which led to showing them the Hello WebVR scene and its source code - often changing a color to show that it's really that easy. I later also added an <a-text> saying "Linuxwochen Wien" to that scene, when someone asked about text. A lot of "wow"s were heard, and many people noted down the aframe.io URL (which I should have had better visible somewhere) and/or had more questions, e.g. on using objects from 3D modeling software (you can, there are components for Collada, GLTF, and other formats), use cases outside of demos and games, device support (which I often had mentioned when talking about WebVR itself) and prices, which phones work with cardboard, how to get cardboards (I could have sold a few there), and more. All in all, WebVR and A-Frame peeked a real lot of interest. 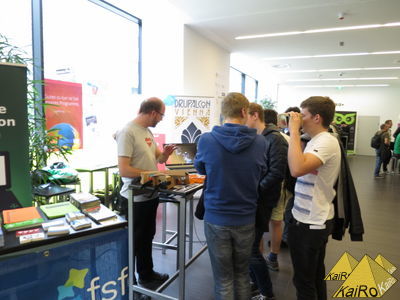 Of course, questions outside of WebVR came up: "Mozilla has been killing so many things lately, what is the project actually working on now?" (leading to talk about a lot of the websites I had stuck on the wall, as well as the whole Quantum efforts to make Firefox better, as well as of course WebVR), questions on that status and future of Thunderbird (I'm on its planning mailing list so could answer most questions there), some Rust-related ones including "can I trust that Rust will be around in a few years when Mozilla tends to kill its own projects all the time?" (I hope I could calm the worries there), the usual Firefox support questions and some one-off specialty items - as well as multiple discussions on the demise of Firefox OS and how that increased the shortage of alternatives next to the proprietary iOS and Android choices on mobile. I was surprised at how there was nobody hugely disturbed by us killing plugins or the upcoming huge changes in the add-ons ecosystem, there was more concern about how many old computers we leave in the cold by unsupporting Windows XP and pre-SSE2 CPUs - and about how we seem to have more graphics-related crashes than Chrome.
One conversation with an IoT hacker once again showed me how much potential FlyWeb could have if it was pushed forward somewhat more.

The conversations definitely showed that there is interest in both more A-Frame/WebVR workshops and also potentially in Rust meetups in Vienna, so I will probably look into that.

This leads me to the A-Frame workshop I did on Friday, which went really well - starting with the introductory Presentation Kit, handing around the cardboards with the museum and 360° image as demos, an introduction round (which I forgot at the beginning, but fit well there as well), and then going hands-on on the attendees laptops. For that, I put up some steps from the A-Frame School - though I pointed people to awesome-aframe and where they can find the school, so they can also do some things at their own pace. I encouraged people to play around with the Hello WebVR example (and most didn't want to use Glitch but instead used local files and their editor of choice) and went around in the room, engaging with the attendees individually as they tried and also struggled with and solved different things. Adding image textures and tag-based animations were the big hit, unlike in my first workshop, there was very little JS used this time. One person had a big stone ball rolling towards the viewer in a narrow street, which can get scary...

The resounding feedback was that everyone (and we had a nicely diverse group, including an older man, multiple women, from web developers to an artist, people with our without previous experience with 3D or VR stuff) could take something with them and most of them were interested to join future workshops on the topic. 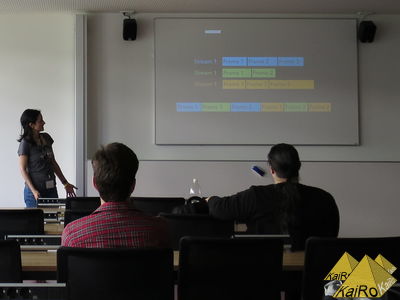 Our talks also did get good feedback from the people we talked to and pretty interesting and interested questions (I tend to take the kind and amount of questions I get at talks as a major piece of feedback). I think that all in all, we could spread the word on a number of Open Web and Mozilla topics and get people interested in things we are doing in this community. I also hope that this will result in growing our community somewhat in the mid to long term, as this time I had to man the booth alone most of the time. Thanks to Dragana and Arpad from the existing community though, who each joined the booth for a few hours on different days (and Dragana of course also for her talk).

For me, this was a pretty successful event, I hope we can do even better in the future - and if you are doing similar events, maybe my experiences can help you as well (feel free to ask me for more details)!