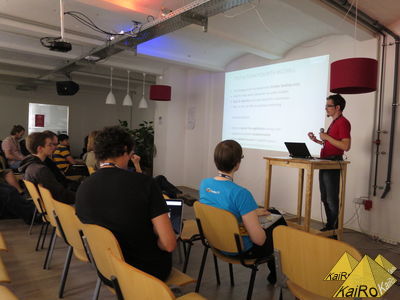 As I mentioned at the end of the recent post on stability graphs, I was looking for doing JS-based, dynamic versions of those graphs. Those would be able to always have current data without manually copying stuff around (as I've done previously) and should be available to more people in the Mozilla community.

That said, even though I tried previously to do some canvas magic to create graphs in JS, it's tedious to create all that code by oneself, so I set out to find a library that can help me.

My set of ideal requirements was:
So, I went on a web search and tried to find libraries that would fulfill my requirements. Interestingly, I saw a number of commercially licensed JS libraries floating around, I guess there's some business in creating graphs out there.
The list below is the libraries I took a closer look at (before you ask, flot is not on the list because it requires jQuery and therefore violates my "graphs only" and "lightweight" goals right away):
So none of those turned out to be completely ideal in the light of my goals/preferences. That said, dygraphs looked decent enough so I went with that in the end and have dynamic versions of my graphs implemented.
(Ping me on IRC if you want a link, I don't want to link them on the blog as the uninformed could come to wrong or hasty conclusions looking at the data).

Of course, if you are looking for a graphs library for your project, you might chose completely differently, but maybe the list is helpful to find what fits your needs.