Since then, SeaMonkey numbers continued rising there, and Mozilla suite usage decreased significantly - and I did some graphs for stats of that page. Counting most hits on the page (this omits some design imagery that bypasses my CBSM system to improve performance), here are some current graphs, including complete April 2007: 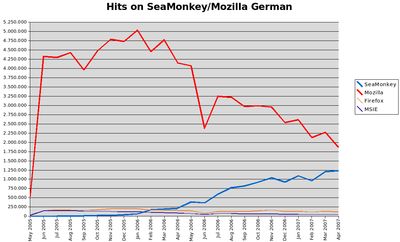 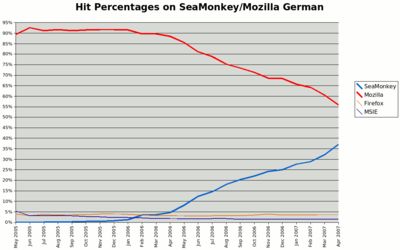 Note that any other than the 4 represented browsers are way below 1% and would only give flat lines at the bottom. (Oh, and in June 2006 I had some server problems, that's why absolute numbers did temporarily drop there.)

As you see, Mozilla suite is falling rapidly nowadays that they get scary warnings on their start page (at least in the German L10n), SeaMonkey is increasing well in percentage, but slowly in absolute numbers. As April has 30 days and March had 31, the actual increase is a bit better though, I calculated a 6% increase in daily average of SeaMonkey hits.

So, all in all, SeaMonkey's update notification is clearly helpful, old Mozilla suite is dropping, and SeaMonkey is slowly rising. We need to do better in getting 1.0.x users to upgrade to 1.1.x though, and we need to get more publicity overall so we get total hits statistics (SeaMonkey+Mozilla) to rise again, as they're currently decreasing significantly every month. Basically positive trends, but still a lot of work to do!