| The roads I take... | SeaMonkey and Lightning Calendar >>

As I mentioned here earlier, the default start page for the German versions of SeaMonkey and the Mozilla suite are running from my site, and I have pretty good statistics about relative usage of those application suites in the German market because of that.
While in February I had still almost 2/3 of the hits coming from Mozilla suite and a bit short of 30% from SeaMonkey, in April Mozilla was down to about 55% and SeaMonkey around 37% - and that trend did continue.

Here's a current graph of hit percentages by browsers: 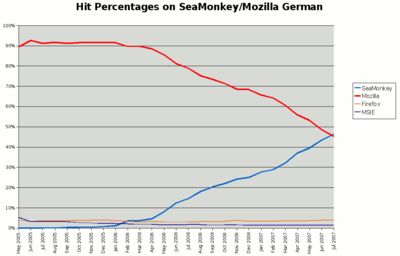 And you'll see from this that it's time to celebrate - SeaMonkey has finally overtaken Mozilla in July!
The July numbers of hit percentage are SeaMonkey leading with 46%, followed by Mozilla with 45%, Firefox is at 4% and MSIE at 1.5% - all others are well below 1% of total hits on the SeaMonkey German site.

This all gives me the impression that the update notification of SeaMonkey surely works better than no notification at all like we had with Mozilla back then. Also, people who stick with some version seem to not even step up to the respective conservative security updates, like the 1.0.x splitting shows. Many people seem to follow the updates we ship though, when they get notified of them, as the decent percentage of 1.1.2 and 1.1.3 shows, but they might not follow them immediately, as the still high 1.1.1 number makes clear.
I hope our move in SeaMonkey 2 to the automatic update system (AUS) also used by Firefox will make people follow the security updates even more closely.

Still, a Gecko percentage of 96% always sounds nice on a site with over 3 million hits per month

- with 2% of the rest being bots, 1.5% Trident (MSIE), 0.15% Presto/Opera and 0.08% KHTML (Safari/Konqueror), just if you might wonder where those other competitors are. Sure, this is a Site dedicated to Gecko browsers and holding the default start page of German SeaMonkey and Mozilla, so Gecko domination is of course expected.

As we're already on this topic and we already know that those hits ale almost all from SeaMonkey and Mozilla suite users, let's take a look at the most-used OSes as well:I've taken the liberty to only use version splits for Windows, and take the sums for others, as well as exclude everything below 0.01% of usage (i.e. below 300 hits this month). XP clearly dominates suite installations by far, but I wondered how low Vista usage seems to be, and how high Win2000 ranks there. This high usage of Win2k likely points to many corporate and university etc. installs being out there.
Another interesting point is that Windows versions below Win2k, which will be dropped by Gecko 1.9 and therefore also SeaMonkey 2, are already below 4% of our users. Given that SeaMonkey 1.1.x will be supported until April or May 2008 at least (6 months after Gecko 1.9 is released with Firefox 3), there's a good chance that this percentage will decrease enough that not too many people will get hurt by this (esp. as I don't know hoe Mozilla and SeaMonkey users are spread across those OSes, but expect that older OSes have potentially higher usage of the older product).

The trend of SeaMonkey adoption and Mozilla suite being abandoned continues well, but probably slower than some people might expect - for me, at least, it can't go fast enough