A nice feature improvement for SeaMonkey 2 has landed today: The new page info window ports functionality that has been coded for Firefox during last year's Google Summer of Code and makes it available in SeaMonkey's reworked page info dialog. 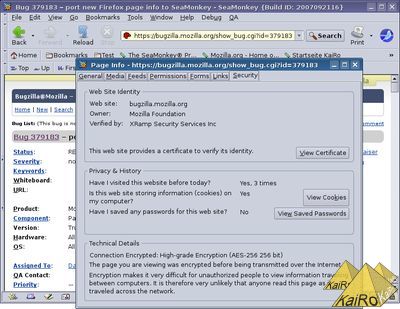 This nicely ties in functionality from other parts of the browser, like permissions, password viewing and cookies, but is also the first place where SeaMonkey recognizes feeds as something special and at least can list them. I still hope someone will pick up the work for a feed reader in SeaMonkey.
Note that this also tries to tie in with history to show if and how often you have visited the page, but that only works correctly with places support turned on, which is not the default for SeaMonkey trunk yet.

Thanks to Daniel Brooks for his work on porting over and improving this code (and to Florian Quèze as well for originally doing those improvements for Firefox).
Oh, and this is also the first completed task in the earlier mentioned KaiRo.at Bug Bounty Program - I hope more will follow this one.