Over 50% of SeaMonkey on German Project Site

As I reported earlier on those numbers, I think I should give you an update on SeaMonkey rates on the German project website - where the new suite accounted for over half of all hits the second month in a row now!

When I posted here last in August, SeaMonkey just had overtaken the old Mozilla suite in hits on that site dedicated mainly to suite downloads and hosting the default start page for both suite.
Now, SeaMonkey (blue line) goes strongly at over 50% while the Mozilla suite (red) has dropped under 40% in November: 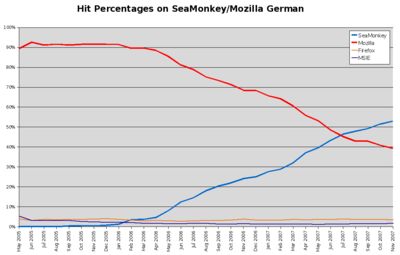 Absolute hits/pages/hosts numbers have been about steady since April, slightly decreasing in summer but gaining again in fall, which means that we gain more and more SeaMonkey users, while the Mozilla suite is equally falling in market share. As 60% of the hits on that website come from people hitting the default home page, or "start page", of German SeaMonkey (and Mozilla suite), web site visits have some correlation with overall adoption of those applications.

In November 2007, we had 96% of all hits on the site coming from Gecko-based browsers (53% SeaMonkey, 39% Mozilla suite, 4% Firefox, other Gecko browser sum up to under 0.1%), a bit below 2% from IE and a bit over 1% from various bots, with about half of the other percent unknown and the other half split between Safari, Opera and consorts.

A short look on OSes tells us that still 77.8% of those hits come from WinXP, Win2000 is at 8.6%, while Vista is still only at 3.7% - which is good from our perspective, as SeaMonkey 1.x has some small glitches on that OS that will only get fixed in the SeaMonkey 2 series.
Linux at 2.3% and Mac systems at 1.7% are surely the vast underdogs in hits on our page, but probably they are a bit underrepresented due to users of those OSes usually being more advanced and more likely to switch to a non-default home page in their browser.

I hope that the numbers continue to grow as they do for SeaMonkey, so that hopefully more and more users of the old, insecure Mozilla suite switch over to the well-maintained, secure alternative we are developing.