It sounds strange, but today I worked on a Firefox (or actually Minefield) extension because I wanted to write SeaMonkey-specific code!

One thing Callek left out for now is getting a tree-based download manager UI for the new backend though, as he (just like me) doesn't have too much experience with custom tree views. After working on places history, I got a first piece of insight into that area though, and so I figured I could at least try how far I could get with such a download manager window.

The problem I had though is that SeaMonkey still has the xpfe backend, and my code needs to work with the new toolkit one. After thinking about this for a while, I realized that it should be possible to just write some code to replace the Firefox download manager with what we want and move it "back" to SeaMonkey once we have the patches for the new backend.

This is what I could get in a few hours of work: 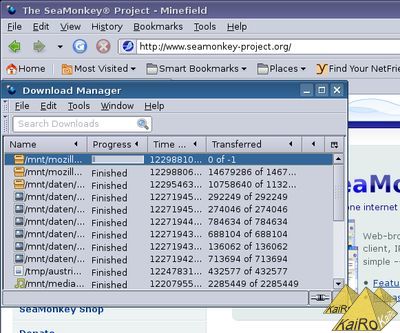 Using nsIDownloadManagerUI, this completely replaces the toolkit download manager even though it's an in-profile extension. Note that it shows grippies as I just symlinked comm.jar etc. from SeaMonkey into my extension and made it define the "communicator" chrome package - I'm not targeting Firefox but SeaMonkey in the end.

The screen shot probably also looks better than reality, the current state doesn't show all info correctly yet or update active downloads, or even do fancy stuff like sorting, searching or managing the downloads yet.

What it does is loads a basic list of downloads at the time the dialog is opened, and show some raw info about it in the cells, without nice formatting.

It's a somewhat interesting way to work on (to-be) SeaMonkey-specific code as a Firefox extension, but I hope it'll help to achieve getting the UI and backend we want in a similar timeframe for SeaMonkey 2.