It's been some time since I blogged lat about SeaMonkey statistics, and as the bouncer download data feed is hosed once again but we have two betas out, I was interested myself in some numbers of how we are doing.

Daniel Einspanjer from the Mozilla Metrics team was friendly and sent me some data he could gather from their systems last week (he says he'd be glad if someone from the community with webdev knowledge would come up to help making a public interface for such data - a blog post from him will come soon).

So, let's look at some graphs: 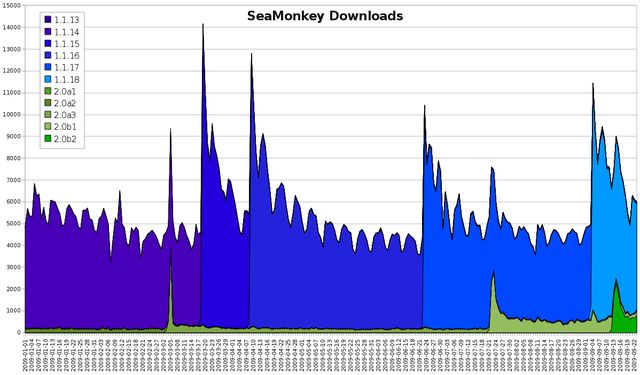 The first one depicts SeaMonkey downloads through downloads.mozilla.org in 2009 so far, excluding auto-update downloads for 2.x versions - blue areas are 1.1.x, green areas are 2.0 alpha/beta.
Of course, the stable 1.1.x ranks much higher than the 2.0 alpha/beta versions, and both naturally show spikes on release days. It's interesting that we got about the same number of 2.0 beta 2 on release day as for beta 1, esp. in the light that automated updates don't show up here, so that's new installations usually. Also, the daily level after the release spike is significantly higher for the betas than for the alphas, which is probably expect but nice to see here as well.
As a note, the 1.1.16 downloads visible in the graph sum up to about 380,000 total, 1.1.17 to about 340,000 - both are only for the main en-US downloads, no localized versions counted for 1.1.x - contrary to 2.0 betas, where localized downloads are also counted now. 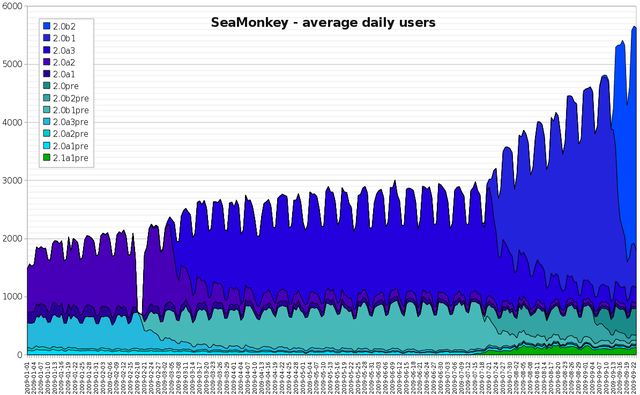 The second graph shows daily users as estimated from add-on blocklist pings. As only SeaMonkey 2.x support the new add-ons system, the data can only take those into account here, we don't have this data for 1.x. Blue areas are official alpha/beta releases, turquoise areas are nightlies or self-built 1.9.1-based versions (with a -pre identifier), the green area is experimental mozilla-central-based 2.1a1pre self-built or nightly builds.
The graph shows that we have a stable pool of somewhat under 1000 nightly users, they probably hit their highest point at the end of the alpha period and decreased slightly with betas - looks like some people found the betas more usable than the nightlies after all.

We had a continuously rising user base all the year, though growth almost stagnated during summer in the late alpha 3 period - only to start a significant steady increase once the first beta hit the public. That increase still goes on today, hitting over 5600 daily users on Sep 22 and 23, the last two days in this data set, over 3800 of those users are on 2.0 beta 2.
And remember, all this is daily users on prereleases, as we don't have a stable version with support for add-on blocklists yet. 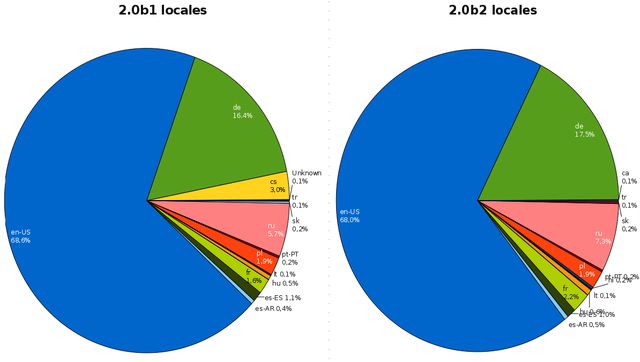 Finally, here's a look at what percentage of those daily users are on what locales, for both betas (which were the first versions shipped in multiple languages).
The huge blue chunk is US English, of course, accounting for slightly over 2/3 of our users on those versions. A comparison with Firefox numbers suggests that this would decrease as we add more locales in the future. The largest localization is German (green) with about 17% of our user base, followed by Russian (pink) with roughly 6-7%. In beta 1, Czech (yellow) had 3% - losing it for beta 2 was somewhat unfortunate for that reason, we sincerely hope it will be back for RCs and final! Polish (red) and French (light green) are used by about 2% of our users, and European Spanish by about 1%, all others have lower usage. I hope we'll add a few locales in the future that will show up with potentially high numbers. Still, this data is all for betas, but interesting nevertheless.

I hope those statistics give you a good look into what's going on with SeaMonkey in terms of downloads and users. I think we are on a good way with 2.0, and I'm surely looking forward to seeing how a final 2.0 will hit the road and those statistics!