One thing I found interesting on the software preservation summit was that some collectors told us that people investigating preserved software, e.g. for university studies or for museum exhibits, are often not interested in getting the software itself from the collectors they contact, as very often they already could get that via other channels, esp. when it's software that had been wide-spread at one point - a often-mentioned example that apparently is the corner-stone of all software preservation efforts is DOOM.

What many people of those writing works on preserved software or museums doing exhibits on it do want from collectors in those cases is artifacts, or if you want "meta-materials", around the software itself - packaging, guides, brochures, ads, posters, magazine reviews, and whatnot. With those pieces, any papers or exhibits on the software becomes way more interesting and can also deliver some of the culture around the software.

And that made me wonder somewhat - I know we are preserving all binaries we ever shipped and all code at Mozilla, even our website code, but how much of physical objects related to our software are we preserving? Well, we don't have packaging, but we had CDs for some stuff (I remember one for Mozilla 1.0), we did T-shirts, stickers, etc. - and there's surely magazine articles, the NY Times ad, and similar items. What of all that do we still have preserved? Do we have some kind of archive at Mozilla for that?

Here's a part of my "personal collection" of Mozilla artifacts: 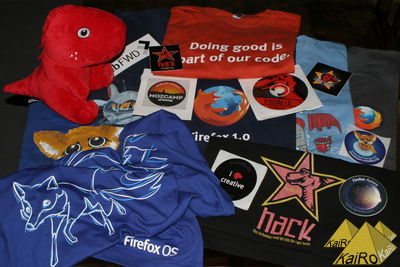 I hope we have a better collection of those things somewhere at Mozilla headquarters or so.

A larger problem for preservation is if you want to preserve the environment and culture that the software was running in, e.g. how it was when you connected the C64 to the TV in your family's home, or even when you ran Altavista (which just has been shut down) for Internet search. At this level, preserving, reproducing or even emulating the environment and experience of older software is becoming really hard - but an interesting challenge esp. for museums trying to educate new generations about our history.

Another, connected, topic is metadata of the software itself - from product names/versions and writers/vendors via info on installation media/packages to file names, checksums and settings of the installed software there is a lot of metadata one can collect along with the preserved binaries and/or code.

For example, NIST's National Software Reference Library (NSRL) - see also this interview by the LoC - is collecting a lot of information about the installed software, and also what it leaves behind when uninstalled (as their original cause is to help the FBI find out what was installed on investigated computers).
And this metadata collection might actually provide us with an opportunity: Knowing the names and checksums of libraries installed with valid software can help us identify at least some of the libraries we see correlated with crashes. For that reason, we recently did get the Dragnet tool online that is intended to help us there, and it would be great if metadata from NSRL or similar efforts can be connected to that and help us in our own investigations there.
So, here's a way that software preservation efforts can directly play back into our current work on understanding current software and improving future releases of Firefox!