One presentation I found particularly interesting on the Software Preservation Summit at the Library of Congress was by Jason Scott of The Internet Archive (archive.org).

Jason talked about multiple efforts he's involved in, including his early (and ongoing) work on textfiles.com, collecting writing from the time when people first got online, and some other initiatives I'll mention at the end of this blog, but the main focus was on The Internet Archive, the non-profit he is working for nowadays and which has public collections of historical digital content as its main mission. 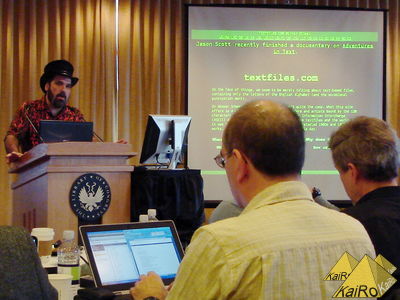 The site and organization are probably best known for the Wayback Machine, which has archived "over 240 billion web pages" going back more then 15 years, see e.g. a Mozilla homepage from around the time when I first encountered the project. But next to that, they have tons of other digital content archived - video, audio, texts, and more. Jason said they are basically seeking to store everything available in digital format that could be of any historical use at some point - preferably first making sure it's store and worrying about legal questions only as they arise, as it's better to have something but take it down than to be able to publish it but not having lost it to history. He went as far as to say they want to be "the hard drive of the Internet" and store everything anyone gives to them, be it personal documents, software that was published at some point, or other digital content. For example their software collection contains collections of entire FTP servers of the past as well as CD images and terabytes (!) of software and firmware for old systems to run in emulators.

And there's an "Upload" button on the site as well, inviting me, you, and everyone else to contribute content that they can archive!
So, if you have old digital content lying around, go to archive.org and make it available to the public, including the kids of the future, before it gets covered with enough dust or otherwise degrade in a way that the media can't be cleanly read any more.

If you have really important pieces of history that are on media that you fear is too dusty and old to still be read cleanly, or where it's hard to find any drive to read that media any more, or you know of such things that might otherwise be hard to recover, you might be interested in another project that Justin Scott is involved in: the Archive Team. That group is dedicated to rescue old digital contents where it's not easy, and to save history before it's actually lost. They have specialized equipment to read even aged disks and tapes, and they are building up communities to save sites before they die - they even archived most of Geocities before it died!
A quite awesome story is also how they helped to recover the original "Prince of Persia" source code.

And then, there's one more of Jason's projects that Mozilla folks will probably like: JAVASCRIPT MESS!

Jason used EmScripten to port the MESS emulator into JavaScript and run it from a browser. Yes, you can run Atari 2600 or Sega Genesis games in the browser! This is only a beta right now, but it shows how the "browser" (or should I say "web runtime"?) can help us enable to make software history available to future generations!

All those projects can profit from your help, so if you have anything you can contribute, please do so!