Sending Encrypted Messages from JavaScript to Python via Blockchain

Last year, I worked with the Capacity team on the Crypto stamp project, the first physical postage stamp with a unique digital twin, issued by the Austrian Postal Service (Österreichische Post AG). Those stamps are mainly intended as collectibles, but their physical "half" can be used as valid postage on packages or letters, and a QR code on that physical stamp links to a website presenting the digital collectible. Our job (at Capacity Blockchain Solutions) was to build that digital collectible, the website at crypto.post.at, and the back-end service delivering both public meta data and the back end for the website. I specifically did most of the work on the Ethereum Smart Contract for the digital collectible, a "non-fungible token" (NFT) using the ERC-721 standard (publicly visible), as well as the back-end REST service, which I implemented in Python (based on Flask and Web3.py). The coding for the website was done by colleagues, of course using JavaScript for the dynamic elements. 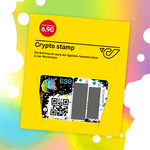 One feature we have in this project is that people can purchase Crypto stamps directly from the blockchain, with the website guiding those with an Ethreum-enabled browser (e.g. with the MetaMask add-on) through that. By sending Ether cryptocurrency to the right address (the OnChainShop contract), they will directly receive the digital NFT - but then, every Crypto stamp consists of both a digital and physical item, so what about the physical part?
Of course, we cannot send a physical item to an Ethereum address (which is just a mostly-random number) so we needed a way for the owner of the NFT to give us (or actually Post AG) a postal address to send the physical stamp to. For this, we added a form to allow them to enter the postal address for stamps that were bought via the OnChain shop - but then the issue arose of how would we would verify that the sender was the actual owner of the NFT. Additionally, we had to figure out how do we do this without requiring a separate database or authentication in the back end, as we also did not need those features for anything else, since authentication for purchases are already done via signed transactions on the blockchain, and any data that needs to be stored is either static or on the blockchain.

We can easily verify the ownership if we send the information to a Smart Contract function on the blockchain, given that the owner has proven to be able to do such calls by purchasing via the OnChain shop already, and anyone sending transactions there has to sign those. To not need to store the whole postage address in the blockchain state database, which is expensive, we just emit an event and therefore put it in the event log, which is much cheaper and can still be read by our back end service and forwarded to Post AG. But then, anything sent to the public Ethereum blockchain (no matter if we put it into state or logs afterwards) is also visible to everyone else, and postal address are private data, so we need to ensure others reading the message cannot actually read that data.
So, our basic idea sounded simple: We generate a public/private key pair, use the public key to encrypt the postage address on the website, call a Smart Contract function with that data, signed by the user, emit an event with the data, and decrypt the information on the back-end service when receiving the event, before forwarding it to the actual shipping department in a nice format. As someone who has heard a lot about encryption but not actually coded encryption usage, I was surprised how many issues we ran into when actually writing the code.

So, first thing I did was seeing what techniques there are for sending encrypted messages, and pretty soon I found ECIES and was enthusiastic that sending encrypted messages was standardized, there are libraries for this in many languages and we just need to use implementations of that standard on both sides and it's all solved! Yay!
So I looked for ECIES libraries, both for JavaScript to be used in the browser and for Python, making sure they are still maintained. After some looking, I settled for eccrypto (JS) and eciespy, which both sounded pretty decent in usage and being kept up to date. I created a private/public key pair, trying to encrypt back and forth via eccrypto worked, so I went for trying to decrypt via eciespy, with great hope - only to see that eccrypto.encrypt() results in an object with 4 member strings while eciespy expects a string as input. Hmm.

With some digging, I found out that ECIES is not the same as ECIES. Sigh. It's a standard in terms of providing a standard framework for encrypting messages but there are multiple variants for the steps in the standardized mechanism, and both sides (encryption and decryption) need to agree on using the same to make it work correctly. Now, both eccrypto and eciespy implement exactly one variant, and of course two different ones, of course. Things would have been too easy if the implementations would be compatible, right?

So, I had to unpack what ECIES does to understand better what happens there. For one thing, ECIES basically does an ECDH exchange with the receiver's public key and a random "ephemeral" private key to derive a shared secret, which is then used as the key for AES-encrypting the message. The message is sent over to the recipient along with the AES parameters (IV, MAC) and the "ephemeral" public key. The recipient can use that public key along with their private key in ECDH, get the same shared secret, and do another round of AES with the given parameters to decrypt (as AES is symmetric, i.e. encryption and decryption are the same operation).

While both libraries use the secp256k1 curve (which incidentally is also used by Ethereum and Bitcoin) for ECDH, and both use AES-256, the main difference there, as I figured, is the AES cipher block mode - eccrypto uses CBC while eciespy uses GCM. Both modes are fine for what we are doing here, but we need to make sure we use the same on both sides. And additional difference is that eccrypto gives us the IV, MAC, ciphertext, and ephemeral public key as separate values while eciespy expects them packed into a single string - but that would be easier to cope with.

In any case, I would need to change one of the two sides and not use the simple-to-use libraries. Given that I was writing the Python code while my collegues working on the website were already busy enough with other feature work needed there, I decided that the JavaScript-side code would stay with eccrypto and I'd figure out the decoding part on the Python side, taking apart and adapting the steps that ecies would have done.
We'd convert the 4 values returned from eccrypto.encrypt() to hex strings, stick them into a JSON and stringify that to hand it over to the blockchain function - using code very similar to this:

So, on the Python side, I went and took the ECDH bits from eciespy, and by looking at eccrypto code as an example and the relevant Python libraries, implemented code to make AES-CBC work with the data we get from our blockchain event listener. And then I found out that it still did not work, as I got garbage out instead of the expected result. Ouch. Adding more debug messages, I realized that the key used for AES was already wrong, so ECDH resulted in the wrong shared secret. Now I was really confused: Same elliptic curve, right public and private keys used, but the much-proven ECDH algorithm gives me a wrong result? How can that be? I was fully of disbelief and despair, wondering if this could be solved at all.
But I went for web searches trying to find out why in the world ECDH could give different results on different libraries that all use the secp256k1 curve. And I found documents of that same issue. And it comes down to this: While standard ECDH returns the x coordinate of the resulting point, the libsecp256k1 developers (I believe that's a part of the Bitcoin community) found it would be more secure to instead return the SHA256 hash of both coordinates of that point. This may be a good idea when everyone uses the same library, but eccrypto uses a standard library while eciespy uses libsecp256k1 - and so they disagree on the shared secret, which is pretty unhelpful in our case.

In the end, I also replaced the ECDH pieces from eciespy with equivalent code using a standard library - and suddenly things worked! \o/
I was fully of joy, and we had code we could use for Crypto stamp - and since the release in June 2019, this mechanism has been used successfully for over a hundred shipments of stamps to postal addresses (note that we had a limited amount available in the OnChainShop).

So, here's the Python code used for decrypting (we pip install eciespy cryptography in our virtualenv - not sure if eciespy is still needed but it may for dependencies we end up using):
So, this mechanism has caused me quite a bit of work and you probably don't want to know the word I shouted at my computer at times while trying to figure this all out, but the results works great, and if you are ever in need of something like this, I hope I could shed some light on how to achieve it!
For further illustration, here's a flow graph of how the data gets from the user to Post AG in the end - the ECIES code samples are highlighted with light blue, all encryption-related things are blue in general, red is unencrypted data, while green is encrypted data: 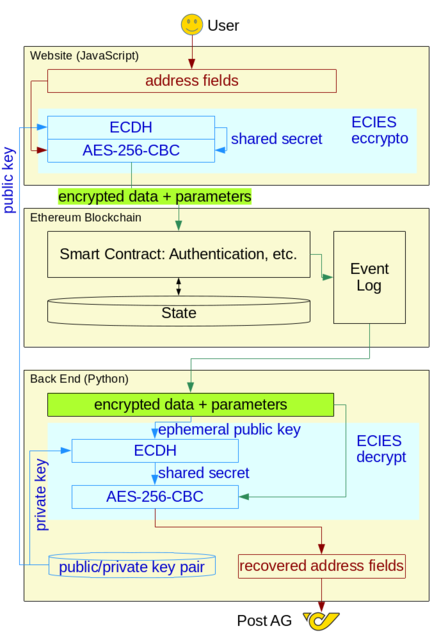 Thanks to Post AG and Capacity for letting me work on interesting projects like that - and keep checking crypto.post.at for news about the next iteration of Crypto stamp!