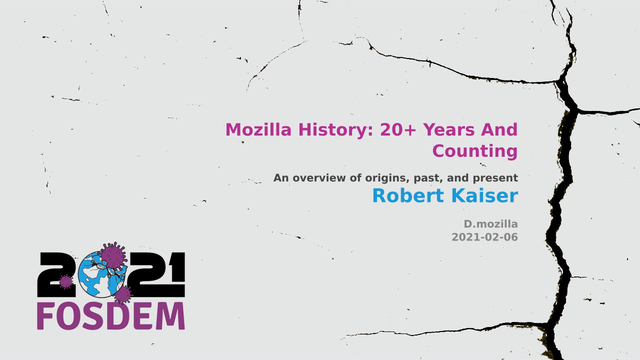 I've been meaning to blog again for some time, and just looked in disbelief at the date of my last post. Yes, I'm still around. I hope I get to write more often in the future.

Ludo just posted his thoughts on FOSDEM, which I also attended last weekend as a volunteer for Mozilla. I have been attending this conference since 2002, when it first went by that exact name, and since then AFAIK only missed the 2010 edition, giving talks in the Mozilla dev room almost every year - though funnily enough, in two of the three years where I've been a member of the Mozilla Tech Speakers program, my talks were not accepted into that room, while I made it all the years before. In fact, that's more telling a story of how interested speakers are in getting into this room nowadays, while in the past there were probably fewer submissions in total. So, this year I helped out Sunday's Mozilla developer room by managing the crowd entering/leaving at the door(s), similar to what I did in the last few years, and given that we had fewer volunteers this year, I also helped out at the Mozilla booth on Saturday. Unfortunately, being busy volunteering on both days meant that I did not catch any talks at all at the conference (I hear there were some good ones esp. in our dev room), but I had a number of good hallway and booth conversations with various people, esp. within the Mozilla community - be it with friends I had not seen for a while, new interesting people within and outside of Mozilla, or conversations clearing up lingering questions.

Now, this was the 20th conference by the FOSDEM team (their first one went by "OSDEM", before they added the "F" in 2002), and the number 20 is coming up for me all over the place - not just that it works double duty in the current year's number 2020, but even in the months before, I started my row of 20-year anniversaries in terms of my Mozilla contributions: first bug reported in May, first contribution contact in December, first German-language Mozilla suite release on January 1, and will will continue with the 20th anniversaries of my first patches to shared code this summer - see 'My Web Story' post from 2013 for more details. So, being part of an Open-Source project with more than 20 years of history, celebrating a number of 20th anniversaries in that community, I see that number popping up quite a bit nowadays. Around the turn of the century/millennium, a lot of change happened, for me personally but all around as well. Since then, it has been a whirlwind, and change is the one constant that really stayed with me and has become almost a good friend. A lot of changes are going on in the Mozilla community right now as well, and after a bit of a slump and trying to find my new place in this community (since I switched back from staff to volunteer in 2016), I'm definitely excited again to try and help building this next chapter of the future with my fellow Mozillians.

There's so much more going around in my mind, but for now I'll leave it at that: In past times, when I was invited as volunteer or staff, the Mozilla Summits and All-hands were points that energized me and gave me motivation to push forward on making Mozilla better. This year, FOSDEM, with my volunteering and the conversations I had, did the same job. Let's build a better Internet and a better Mozilla community!