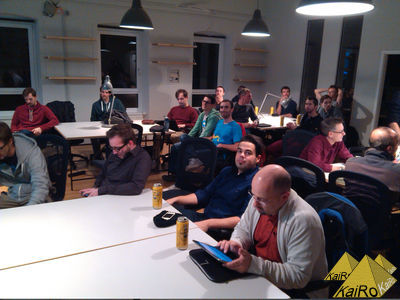 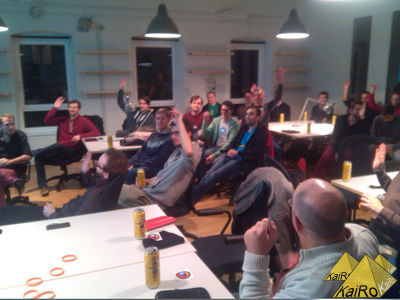 Representing Mozilla as Sponsor of SotM-EU

I've recently enlisted into the Mozilla Reps ("ReMo") program, mainly to procure sponsoring by Mozilla for the 1st European OpenStreetMap conference, known as "State of the Map - Europe" (SotM-EU).

I'll be the sole representative this weekend of Mozilla being one of the major sponsors of this event, and I'm also helping somewhat with organizational matters, as my colleagues from the "OpenStreetMap Austria" association are the organizers of the conference.

It will be an interesting role to represent Mozilla, and I'm very proud of that, as this gives me a chance to talk a lot about the one thing in Mozilla I'm most passionate about: our mission.
Supporting a conference on an open, innovative project that creates opportunities for everyone on the web and beyond goes to the heart of what Mozilla is, and I couldn't be happier about being present there. 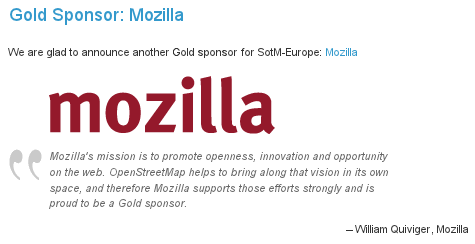 Things start off with a public pre-event discussion tomorrow evening and the conference itself is taking place from Friday to Sunday, so don't expect to see me online a lot in the next few days, I'm exploring this strange place called "real life" with other geeks - and probably mapping it out some more.

State Of The Map Europe conference is coming!

As I just came home from another planning meeting for it, I realize I should actually blog about this event as well.

Vienna, Austria, is hosting the first ever State Of The Map Europe conference ("SotM-EU") this July (15th-17th)!

This event will be a gathering point for a significant part of mainly (but not only) the European OpenStreetMap (OSM) community - at least of a number of "hard core" contributors who are willing to travel to and even pay for coming together in this way. We will have 2 main tracks with ~50 talks going on in three days, headed by keynotes coming from Steve Coast, the founder of OSM, and Muki Haklay, a London researcher.

If you're an OpenStreetMap contributor or heavily interested in the project and its dynamics and you have been looking for a good excuse to visit Vienna for a long time, here's your chance - Registration is open!
(Sorry, we need to charge a moderate registration fee as we're a non-profit and don't have nearly enough sponsoring to not make money a problem - hint: if you know a good sponsor, we could always need a few more.)

For now, I think I'm the only Mozillian on the attendees list - I'd hope that will change before the event actually takes place, given the common interest of our projects in open and innovative data on the Internet!