When I added OpenSearch support for SeaMonkey 2.1 a few months ago, there was one thing I knew wasn't complete: We had no management UI for removing OpenSearch engines again, or even setting search keywords. Also, there was this request that had come up rarely, but still repeatedly, that a "search bar" in Firefox style should be available to add to the toolbar - even if not present there by default.

And after porting all the OpenSearch integration code, this was not incredibly hard any more, it was mostly copying over the Firefox search bar and engine manager code (the latter is available from the former, so they're slightly tied together) and then fitting it into SeaMonkey (and even cleaning them up a little, which I will backport to Firefox again).

And this is how it looks in my test build (and nightlies starting tomorrow) with the search bar customized in: 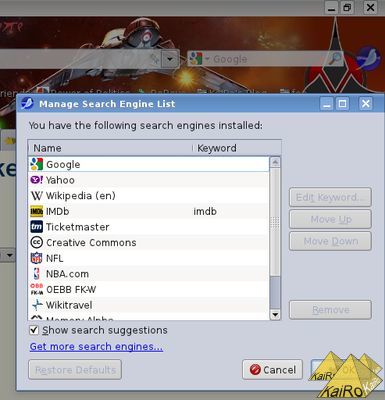 Of course, as stated before, this additional box is hidden by default, but a right click on any free area in the toolbars and selecting "Customize..." will allow you to drag it into the active set.

Today, for the official sixth anniversary of the SeaMonkey project (see last year's anniversary article), it fits well that this patch did land on the comm-central tree and very probably marks the last major work I land for SeaMonkey as I'm transitioning to new challenges.

I'd like to thank everyone who has patiently reviewed all those large porting patches I did, trying to get some of the heavy lifting done to bring the SeaMonkey suite into the 21st century - which I think the upcoming 2.1 release and its currently available betas do and will demonstrate beautifully.

It's been a pleasure and I'm happy I could contribute a number of important pieces of work to this still thriving and now even reasonably modern Internet suite with bleeding edge support of web innovations like a lot of HTML5 and CSS3. Who would have thought 6 years ago that this project would come to where it is today?

Just before flying off to California and in the middle of packing, I could make yet another addition to the SeaMonkey 2.1 feature list: 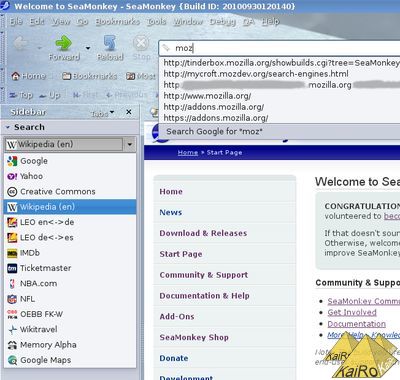 We're late into this compared to Firefox, but this is one of the last, maybe even actually the last, item we needed to pick of from "the toolkit". The good thing is that now, all the search plugins that work for Firefox and possibly other browsers also do work for SeaMonkey. The bad news is that the special feature we had, the scraping of search results into the sidebar, is gone now and we don't have a clear idea if it would even be possible to get it back.

Also, we don't have a search bar available yet (it's planned to have it as an optional item through toolbar customization), the sidebar does some of its job for now, but even things like detecting site-specific engines or search suggestions are not available there yet.
The current state is a first step to get this feature in at all for SeaMonkey 2.1 Beta 1, now further steps can be taken to refine and improve it for the second beta and the final release.