<< Your next comm-central pull will break! Pull again to fix! | The roads I take... | How Fast Is TraceMonkey In Real World? >>

As a fun side project, I have started work on a new version of my old "Mandelbrot" application I did for my final paper in school, back then in Visual Basic. The application renders images of the Mandelbrot set fractal, the original application had nice zoom functionality and could even render the very similarly calculated family of Julia set fractals.
The difference this time is that this is a XULRunner application, rendering images into a <canvas> HTML element.
After getting rid of a number of early bugs in my code, this is (a thumbnail of) the first image I rendered with the color palette I ported from my old code: 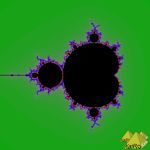 The application is still quite primitive and unfortunately the JavaScript/canvas combination isn't the fastest way to do the math and paint the picture - the default 300x300 overview picture currently takes ~90 seconds of one of my Conroe cores being busy until it displays. When I get farther down the road with what I want from this app, I probably will open-source the code under the tri-license. This is mainly an educational project for me to learn how to do such a XULRunner app. Don't expect a finished app and/or something to try out yourself too soon though, this is just a fun side project - my main focus is of course on SeaMonkey!