The latest version of my LCARStrek theme does not just support the latest SeaMonkey and Firefox releases. As I'm using it myself on Nightly, I'm trying to keep it working in an experimental way with that as well - and with that, a pretty huge challenge came up in the last weeks: A redesign of the Firefox interface code-named "Australis".

I blogged a month ago about how it may affect my customizations and I have dealt with those to a good degree by now, even though not yet even as drastically as I thought when writing that blog post. As always, more will follow. It took me some time until I switched over actually, as I wanted to keep using my theme, but it was naturally not compatible with such a huge redesign.

But after a lot of hours of my free time in the last few weeks, I have experimental support for Australis working in LCARStrek. The new changes living together with support for pre-Australis Firefox in the same theme require quite a few hacks to have a number of styles only apply on one side or the other. But then, I have been doing theme design for long enough (about 14 years now) that I know a few tricks and could use those - thankfully, there are a few changes in attributes set on the main toolbox, for example.

There's still a lot to be done in this area to fix some details (and I see a painting issue that is triggered in the submenus of the new main menu but is probably Linux-specific and connected to transparency used in the arrowpanel), but the main things seems to work decently now. See this screenshot: 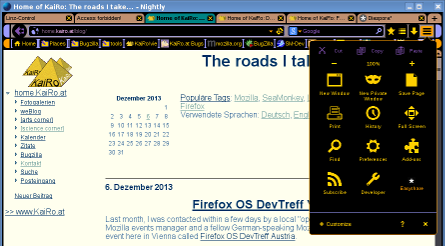 Given that I'm using it every day, I hope starting now gives me enough experience with it that I can deliver a really decent theme when Australis finally will ship, probably with Firefox 29.