One of the last legacy modules SeaMonkey currently is still importing from old CVS is extensions/typeaheadfind. This modules drives the suite's "Find as you type" feature in browser and even mailnews message content areas and is invoked by just typing some text to be found, possibly prefixed by / or ' to specify searching in any text or just links, and giving UI feedback on those actions in the status bar. While this is quite convenient for the power user, it's hardly discoverable for people who don't know it.
Because of that, Firefox developers have forked that code into the toolkit, reworked it a bit and developed the "findbar" UI that appears at the bottom of browser windows based on it, merging it with the "find in page" feature that was/is an annoying separate dialog in the suite and making it much better discoverable.

Now, SeaMonkey supporters have basically had two problems with that approach for quite some time:The former probably could be addressed with a pref and some coding if wanted, the latter was actually an intentional decision: If the bar would open at the top of the content part of the window, Firefox devs said it would push content down, and moving content is a bad experience. Now they did implement moving content with notification bars, but even there it's suboptimal. A look at Safari shows how a solution for such issues could look like UI-wise: We could just open such a bar more or less over the top part of the content, just adjusting the scrollbar so one could scroll up to the now hidden top of the content, leaving the page itself completely in place. That only works well when a scrollbar is already shown, but then, I think people mostly use such a findbar on pages that already show a scrollbar.
In any case, any of those solutions would need someone to work on, and actually, the "find as you type" feature works well enough for most SeaMonkey devs not to think about this and not pick up such work.

Now enter today: Benjamin Smedberg checked in a "deCOMtamination" patch that breaks suite typeaheadfind, and it's hard to just fix this as the code still lives in CVS and is shared with 1.9.0-based Camino. There are multiple reasons why I tried very hard to keep things this way and not move the code to suite/ in comm-central:So, how to fix the breakage introduced by this deCOM patch, when it can't be done in CVS but importing into suite/ is a bad idea as well? For now, I think the best idea is removing the whole module from the SeaMonkey build. Yes, that means we won't have a "find as you type" feature at all for the moment - but perhaps exactly that is a reason for someone to step in and finally hack on something that builds on toolkit code, is maintained, and really does what it should do. I'm very interested in how this works out.

Oh, and if you can help here, we'd very much appreciate it!

The Death of the Fishcam Easter Egg?

It looks like the legendary Netscape (later AOL) Fishcam in Mountain View has really gone away now, the last URL where one could get a live feed has been redirected to netscape.aol.com, and a still existing old page has only static content but no live camera any more.
SeaMonkey still has the Ctrl-Alt-F shortcut mapped to calling a webpage for the fishcam but this has been failing recently. In theory, a live cam of maritime life would fit very well with SeaMonkey, actually (due to the creatures we're named after), and it would be even cooler if that would use an ogg stream and the HTML5 <video> tag on trunk.

It's just that we don't have such a cam available any more, from all we know.

Because of that, I probably will review the patch to remove this easter egg unless someone comes up with a really appealing proposal of where it should point to nowadays.

One of the areas I've been thinking about more and more recently and what also came up at MozCamp in Barcelona is the long-term vision for SeaMonkey. This is not about specific features we want, and this is not about SeaMonkey 2 or 3 or so - this is more about the stars shining on the horizon that give us a clear orientation of where we want to be moving to in the long term. That vision is closely related to our target audience, and is built up by high-level goals. For now, we are busy with making SeaMonkey 2 catch up to modern technology and represent where browsers and mail/new clients are supposed to be currently, but after we will have achieved that, we will need to know where to go from there, in what direction our software should develop.
Is conserving historic UI our goal? Is merely throwing copies of Firefox and Thunderbird into the same process our goal? Is tight integration and breaking up borders between browser, mail, chat and maybe even web page creation our goal? Is overloading the UI with options almost nobody uses our goal? Or having everything a power-user regularly uses available as easily and fast as possible? Is a strict structure of predefined UI our goal, or as fully customizable user experience? Is SeaMonkey relevant at all in the long run? Why (not)?
I'd like everyone who considers himself part of the SeaMonkey community to take a few moments in a probably otherwise unused timeframe, let you thoughts circle around this topic a bit, perhaps take notes, and try to figure out where you want SeaMonkey to go in the long term, where you see those visions and why. I'll start a thread on the development newsgroup about this soon, and I'll probably blog about it even more.
It will be interesting to hear your thoughts and figure out where we all will be heading in the future!

I attended a seminar about "Social Web" in the light of politics on Friday, and even though I of course am fully involved in social web activities, learning how others describe and view that is quite interesting. And collaboration, participation and direct feedback are components I see as fitting very well with how I think politics should work. Currently, most parties and politicians around here don't deal with things like blogs etc. very well, I think we only mentioned two or three exceptions of individuals. In the US, both presidential campaigns make much more use of that, but I think the real key is in long-term involvement a real authentic usage of those instruments and technologies. I'm looking forward to a time where everyone can discuss and collaborate with politicians through their blogs, YouTube-style videos and whatever else - but it probably will still take us a while to get there.

I finally have comfirmation of not only the flight but also the hotel for MozCamp Europe, so I'll be in Barcelona from about noon of October 24 until the morning of October 27, hoping to have some time to actually do some sightseeing on Friday afternoon and meeting a number of European Mozillians and MailNews developers on Saturday and Sunday!

Now that Alpha 1 is out, we're concentrating on moving development further for Alpha 2, and a lot of interesting stuff is in the works: places history featuring a smarter location bar autocomplete, new download manager backend featuring cross-session pause/resume, new password manager backend featuring popup-less password save and fill-in, session restore, toolbar customization, making the Modern theme complete again, better feed support - to name just the big things people in our team are working on. There's also work going on for a lot of smaller items, and this doesn't include anything happening in the Gecko, platform or general mailnews areas.
We're planning on more regular preview releases in the future, and there's still a lot of interesting improvements to come until we can finalize SeaMonkey 2, giving everyone out there the best Internet suite every produced!

What Places Has SeaMonkey Been At?

I've been using places history in SeaMonkey for a long time now, getting the awe... er, helpful search algorithm that this new implementation brings right in SeaMonkey's urlbar.
As nobody picked up UI work for sidebar and history window though, we still can't make this system available for new users and need to stick with the old, outdated, unmaintained, mork xpfe history backend.

Yesterday, I decided I can't stand that any more and started copying code from mozilla/browser/ to suite/ - first the history sidebar panel, then all stuff it pulls in, then I injected parts of places organizer into the SeaMonkey history window, until today I arrived at this: 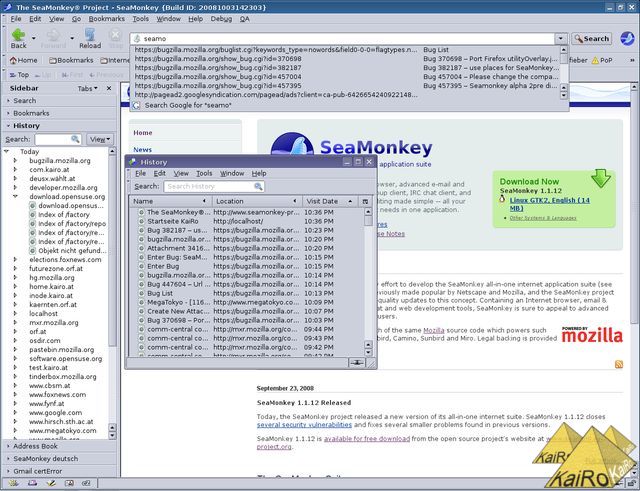 Note the search results of the urlbar matching URLs in the middle and page titles, sorted so that stuff I've been visiting more often is at the top. Both the grouped sidebar view and the table-style history window have a simple search bar now, and due to retrieving only needed stuff from SQLite instead of loading everything into memory, we can vastly increase the amount of URLs we can store in the history.

This is not ready to land, I still need to do a lot of cleanup in the code, as we don't need to pull in all kinds of bookmark stuff, and we need a few functions added to utilityOverlay before this can be checked in - but I came to actually working code much faster than I had expected. And I hope all SeaMonkey testers will be able to store all the places they've been to in the shiny new format by Alpha 2!