A lot of things happened this week, including good and bad messaging in the press for Mozilla, as we held the promise to go for faster release cycles. There is a lot of hope, but also fear, uncertainty, and doubt out there, both in our community and the wider public. We need to address that, but I think we can. I'm excited about the new process because we have an unprecedented time of only stability and polish work on every release when they are in Aurora and even more in Beta stage, and we can really concentrate on doing good crash analysis and catching of nasty bugs there. For this release, we weren't yet confident to call it the most stable release of Firefox ever, but following this new process, we will soon be able to say that based on real data we have. I'm really looking forward to that and to being part of this great story.
And to everyone who still has fears, uncertainties and doubts about it, try to think about how you could embrace this new process of a lot of small steps and only after careful analysis and weighing against taking huge leaps with more time, where you are more prone to stumble when you finally move. Let's try to stay positive and think about how we can make things better on the base of what we have now instead of how a new thing could make some part of the world collapse. Let's stay positive and let's make this world more modern and replace doing revolutions after long times of stagnation with evolving more continuously instead. I believe that could help everyone

New Firefox Process In The Enterprise

Inspired by dolske's great post on Enterprise integration for Firefox (thanks for mentioning my work!) I have been thinking and found that I have all the means to present just how well the new Firefox release process fits into the Enterprise: 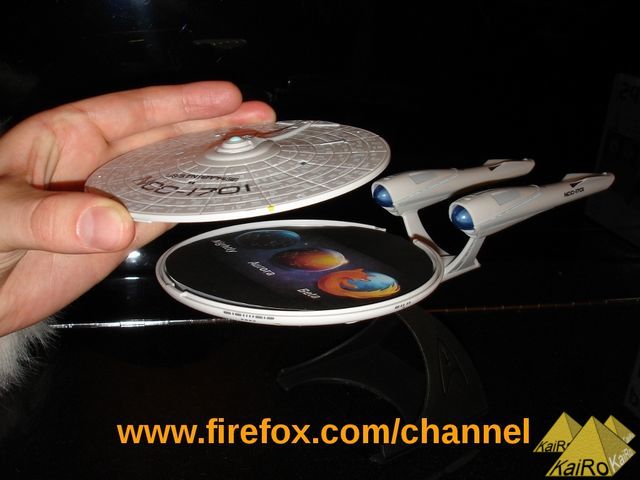 That said, I really think it fits even into other enterprises and we should help them come along on that great ride into the future and our ongoing voyage on the Mozilla mission.

(P.S.: Thanks to dolske for the great train of thought and to Paramount for the great DVD set of the recent Star Trek movie that I could use for the picture.)

The Day Of The Next Generation

Technology. The current frontier. These are the voyages of June 21st, it's ongoing mission to find strange new releases, new devices, and new software. To boldly go where no day has gone before...


This is surely an interesting day. Nokia has just presented the Linux-powered Nokia N9 with a completely new UI and it's surely a very slick device, interesting UI concept, and no matter if system-wise this midway point between Maemo5 and full-fledged MeeGo can be called "MeeGo" legally, having a mass-market phone out there that comes with a fully open "real Linux" is awesome.
The N900, which feels old, slow and clunky nowadays, has a damn good successor - even though the keyboard-attached N950 version has been blocked by carriers and is only available as a "loaned" dev kit to people creating N9 apps. I hope to see that N9 device out there soon, and perhaps it's done well enough that the absence of the keyboard can be taken, but I'd really need to test it for that. Also, I hope that enough of the UI stuff can be opened enough that MeeGo proper can ship it as well. Until all that clears up, I'll keep testing the MeeGo N900 Community Edition, which is shaping up nicely as well. Hopefully open-software phones have a future with all those moves (and I surely hope other vendors will chime in as well, as Nokia can't be fully trusted in that way any more).

But there's much more: I just saw Mozilla people on the US West Coast join IRC at 5am their time and start their work day - Firefox 5 is going public today as the first one off our new release process. While it doesn't ship a lot in terms of new features, the big thing here is that it kickstarts the new process that will get us new Firefox releases every 6-12 weeks that are easy to update to because they don't have a ton of new stuff but still a number of nice features. This time, CSS Animations are probably the only larger thing (next to performance improvements), and most users won't notice them yet, unless they look for some demos. But, the important point is that they're ready and so we can ship them to hundreds of millions of people, not needing to wait for a major version coming in a year or so. It's (going) out there, right now!
This is also the first release I have been there in "Crash Scene Investigation" for its whole cycle, and we learned a lot about a number of things in this cycle, including that we need to attract more people to the Aurora and Beta channels to get even better data, but also that there are some classes of crashes and hangs we need to take a closer look at, and we are doing that. All in all, our beta numbers of Firefox 5 have been quite good, we expect it to be at least as stable as Firefox 4.0.1, probably somewhat better.

In addition to this, Mozilla is shipping the probably last security update to Firefox 3.6, Thunderbird ships a security update for 3.1, and, very importantly, Firefox 5 also ships for Android and the before-mentioned N900 (maemo5) today, right at the same time with the desktop Firefox!

Not enough, though: The SeaMonkey team has just finished up building the first beta of SeaMonkey 2.2 and will ship that to its beta testers later today. This version has the same web-facing features as Firefox 5 (including CC Animations) and the security fixes shipped in other versions today, as well as a number of smaller fixes to SeaMonkey code, some of which have been found since 2.1 has been released.
I'm informed that the team will try to ship the final 2.2 release as soon as possible in the next weeks, hoping that this first beta will do well in testing.

And it's surely possible that this day has even more in store, it's not over yet!

Things are moving fast in Mozilla land - while SeaMonkey just released 2.1 last week, we've been using that one to get "2.3a2" builds from aurora to work and update correctly and get ready for doing the first and potentially last beta for 2.2, which should go for a release within the next 2 weeks or so.

And Firefox is releasing 5.0 tomorrow! I'm excited to see how it does on crashes, as this is the first release on which I've been around in "Crash Scene Investigation" the whole cycle. So far we are looking good, but we still have way fewer users on Aurora and Beta than we would like to have for comprehensive pre-release crash analysis, so the first days of sending it out to users will give us a better picture. Given that changes compared to Firefox 4 are small and the beta numbers we have so far are looking really good, I expect this to be a smooth release in terms of stability - but I'm standing by to help figure things out in case that will not be the case.

The big news for this week surely is that SeaMonkey 2.1 has finally been released! The last few weeks have been a bit bumpy, with various packaging and installer issues, and it's still a bit unclear if all of them have been resolved, but we've finally done it. I was more involved in the final shipping than what I should, but Callek's TODO list is piling up and I could help with a few small tasks that made things run more smoothly and faster overall, so I did that. This is a somewhat emotional moment for me, as I have considered 2.1 "my last SeaMonkey release" for some time, but I want to address this in a separate post (hope I find time for it).

And in terms of my "Crash Scene Investigation" work, things are shaping up nicely, from closely watching Firefox 5 via tooling improvements to working on goals for the next quarter, a lot of items are moving - and that's always a good sign.

Originally coming as a request from the Socorro team, we have been pushing for some time to get a better solution for connecting bugs to crash reports/stats than the bug summary - in the form of a separate "Crash Signature" Field in bug reports.

It wasn't just messy up to now for Socorro (crash-stats) to parse the signatures out of headers, we also had a number of bugs where the constraints on the summary length caused problems with adding multiple signatures or a very long signature - not to speak of making summaries hard to read for humans. All that should get solved with the new special-purpose field that also allows greater length of its content.

You might have noticed that this "Crash Signature" field has turned up in many products of Mozilla's Bugzilla in the last days, below the tracking/status/blocking flags on the right above the comments.

The syntax for entering signatures is similar to what we did put into summaries so far: a signature is listed as [@ crash::signature(params) ] - for multiple signatures, we prefer to use a new line for every signature to make the field more readable, though.

We're migrating over the contents from summaries to the new field, so you don't need to copy those manually - some of that happened already, but the script didn't catch all necessary bugs the first time it ran. Also, the work on Socorro to use the new field has not landed on production yet. Both should be done soon (within days), and then we can fully use the new field. Until then, it's best to leave the field alone and keep using the summary (though for those cases where the summary is too small, populating the new field right away is safe).

In the future, i.e. once Socorro uses the new field, we'll also be able to make summaries more human-readable, e.g. "[meta] EnterMethodJIT crashes" or something similar will be far easier on the eyes for bug 595351.

Thanks to everyone who worked and is still working on implementing that!

I seem to not succeed getting those reports out as timely as I should, and some other things I should or want to get done are not happening as well, even though I on the other hand get a number of things done. I guess the day just has too little time - or I'm spending too little of it in front of the computer... Well, with the current climate being relatively hot and humid here, more time staring at this screen would just be more straining to those eyes that seem to get tired easily in this setup anyhow. Maybe I'll find some other solution.

That said, SeaMonkey is nearing its 2.1 release, Firefox 5 seems to be shaping up reasonably well in terms of stability, and Socorro just shipped an update that incorporates a few things our team has put on the last priorities list, so I think I can be satisfied with what's going on in the areas I'm helping with!