Life Cycle of a Firefox Crash - Video and Graph

You may have seen my blog post about The Life Cycle of a Crash some time ago.

On June 14, I talked about this at a Mozilla Brown Bag, and there is a video of this presentation up on Air Mozilla.

The slides for that talk are available as well.

And here's the graph on the Firefox Crash Life Cycle I used at the end of that talk: 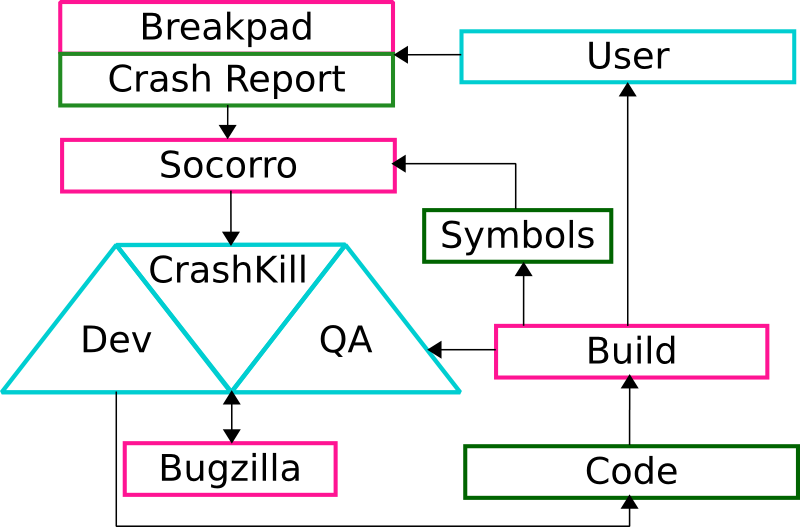 Is There A Better Way To Promote What We Are?

Is there any better way to promote what Mozilla is about than to have an interview with the Mozilla Foundation Executive Director available in a truly open media format with plugin-less playing in browsers supporting the HTML5-standardized <video> element (like Firefox 3.1 or SeaMonkey 2)?

Specifying codecs for the web

You might remember the recent blog post about codecs for <video> we saw on Planet Mozilla recently. I immediately informed my favorite online magazine about open source, LWN.net, about this when I read it, as they and their readers usually are quite interested in anything involving open standards and patents.

A few days later, they ran an article called Specifying codecs for the web about this topic:


Quote:
Audio and video content are increasingly important components of the World Wide Web, which some of us remember, initially, as a text-only experience. Users of free software need not be told that the multimedia aspect of the net can be hard to access without recourse to proprietary tools. So the decisions which are made regarding multimedia support in the next version of the HTML specification are of more than passing interest. A current dispute over the recommended codecs for HTML5 shows just how hard maintaining an interoperable web may be.
As it got public this week (the "weekly edition" is subscriber-only for 7 days), this should be also worth a read by anyone in the Mozilla community who is interested in the HTML5 <video> tag.